When watching a movie, have you ever noticed how characters interact with computers? If someone wants to destroy a computer, what does he or she smash?
The computer’s screen…

With Swagger, it’s almost the same thing. Many people focus only on generated Swagger UI and only see Swagger as a useful way to generate documentation from an API implementation.

But reducing Swagger to an auto-generated interactive API documentation is a terrible mistake.

Swagger is a simple yet powerful representation of your RESTful API.
Swagger.io

… and it’s far from the truth.

In this first post of a new series, I will tell you how I’ve stopped being a computer’s screen smasher and started my Swagger journey.

Lessons from the trenches of an API project

When I started to work on my company’s new API project, Swagger was only Swagger UI, the thing that generate interactive API documentation using annotation in a java application.

It was only a by-product of the project.

But after working for a while on this project, some concerns, not all related to the generated Swagger UI, arise.

Even if our new API is not an open one, it is used by people outside our company so I started to take a closer look at the generated documentation to check if everything was ok. It was… on the surface:

But when taking a closer look at this generated documentation, some problems appear.

There were also some typing errors and missing informations in operations or attributes descriptions.

From API last to API first

Even if our new API is not a ROAST one (really dumb SOAP to pseudo REST conversion), it is still tightly coupled to our SOA as it was designed last and with not much hindsight. Just like a by-product, just like a necessary evil. 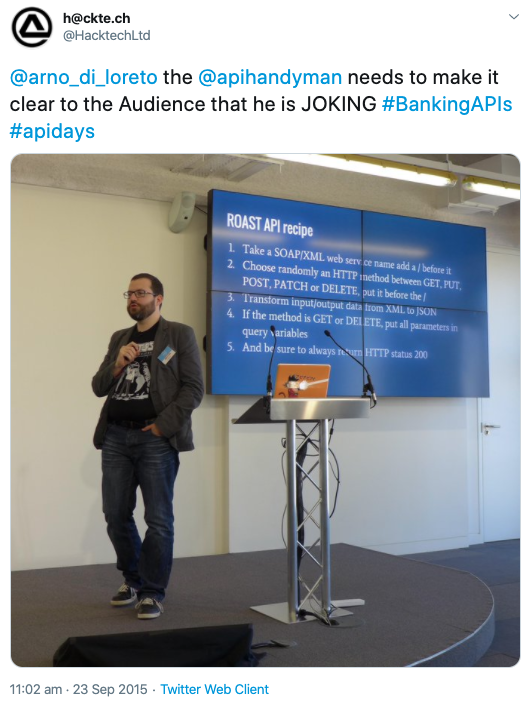 I wanted to change that and make the API a first class citizen in our system just like our website or mobile application. I wanted to really have an API first approach with tools to help us design faster and mock to test easily the design to ensure a good quality from the start.

A good Word specification is the one you didn’t wrote

Wether you design your API last or first, you need something to describe it. We were using Word and Excel documents to describe our API, just like we’ve always done with our SOA. Working with such documents has never been an easy task:

I wanted to get rid of all this and have something more fast, more simple, more consistent, more maintainable, more documentation as code and both human and machine readable.

Hopefully, it was at that time that Swagger 2.0 was released with the YAML editor and its tools. Thanks to this new version, I realized my mistake, I realized that Swagger was not only generated Swagger UI.

Swagger is an API definition language and there are so many tools using it.

By really using Swagger and its ecosystem I thought we could:

So this is how I started my Swagger journey, with so many ideas in mind and so many hopes. But I was confident and I knew I would not be alone on this journey as the Swagger community is large and friendly. On the next post, I’ll explain how I use standard Swagger tools to write API definitions.

Want to learn how to design simple, user friendly, secure and implementable APIs that do everything they should?

Use code fcclauret to get 37% off my book The Design of Web APIs (works also on any other Manning product!).

Disclosure: the link above is an affiliated link, meaning, at no additional cost to you, I will earn a commission if you click through and make a purchase.